So, today it's the turn of my little red muffin. He's the only one that I don't have a tentative name for yet. Nothing suits him yet, so he's just little boy or little fatty (why does my brain always insist that little fatty is an affectionate name!). Fatties are cute though. That huge belly is just so smooshable!

Red is now enjoying his daily smooshes, but oh is he a fierce boy! Today I got brutally savaged again, and my hand barely lived to tell the tale of the all out gumming. He gets so excited when he manages to catch your hand in his paws, then he holds on for dear life, lifts his head up, wobbles from side to side with the effort of holding it there, mashes his face into your hand just to check you're still there, falls over because his traitorous head wobbled and pushed him off balance, repeats the performance so far, then opens his mouth as wide as it will go and chomps you. I'm sure he only does it because he knows that the tummy tickling will increase when he does. When this happens, the dreadful attack will cease mainly because he's physically fallen over and is rolling around with his paws above his head.

Red has, just today, taken his first full, belly off the ground, legs actually straight, non falling over steps. He managed a whole 10 inches before he fell on his face, but after that, there was no stopping him. He was determined that he was going to leave his littermates and crawl to me for a fuss. This upset mum as it took him slightly out of her line of sight and she was feeding at the time so I kept putting him back. I must have put him back 6 or 7 times at least, and in the end, the only way I could get him to stay there was by tickling his tummy.

His teeth are definitely coming. I can feel little bulges below his gums. He's a greedy little monkey and is feeding at every chance he gets. He's also an absolute suck with Millie, a mummy's boy through and through. He climbs up and lies along her neck for a cuddle, he feeds on the front nipple just so that he can get a cuddle at the same time (Millie gives lots of lovin and snuggles to whatever bit of a kitten she can reach when they're feeding.

I'm working with this boy now on being picked up without screaming, and have discovered that I can have him in my hands inside the pen for as long as I like. He just shrieks when you lift him totally out of it. I held him under my chin for ages today, and he kept popping his head up for kisses and just to chunter at me.

He was the first kitten to break 300 g, and today he weighed in at a whopping 311. he's currently the biggest! He loves his sister Stripey, and will cry and shout for her until she comes to sleep with him or play fight. They love wrestling together! If things continue as they are, this pair might be very hard to split.

So, here's some photos of the little love. Enjoy! 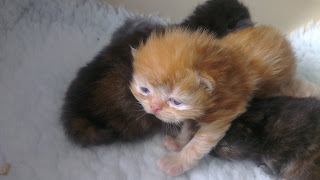 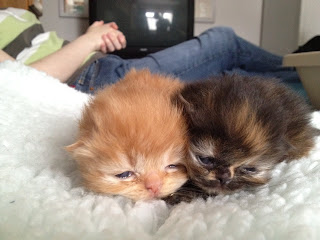 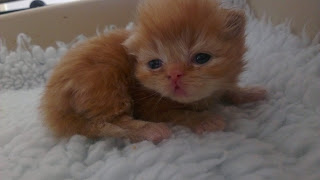 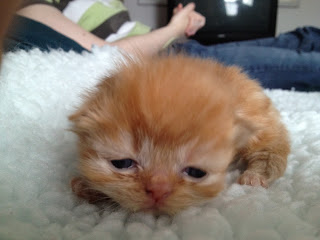