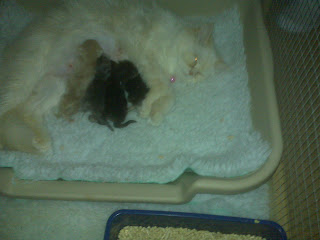 Well, today for the kittens has been rather uneventful. They're all
gaining weight reasonably well now, with some of them gaining
massively! Stripe is a little piggy. She's the only one out of the
litter that has consistently gained and never lost anything or even
had a maintain and she's currently the heaviest at 137 grams. Apache
is the lightest at 114 with the others all being over 120.

Millie got to see the other cats again for the first time today. I
bought them in one by one so that if there was a reaction, they could
be removed swiftly. If I'd been hoping for a reaction I'd have been
sadly disappointed. Tia gave the pen a few cursory sniffs, then went
off to curl up under my bed. Gabby didn't even get that far, just
peeped in then went off to savage the chord of my dressing gown. I
didn't leave them in there for more than a few minutes. Some breeders
separate adults and kittens completely but I'm reluctant to do this as
it then leaves Millie having to be reintroduced as though she was a
new cat in 9 weeks' time after the kits' first vaccination. Millie is
timid and cautious with other cats who are particularly in your face,
and both torties are definitely that, so if they were to turn hostile,
then there's no guarantee I'd ever reintegrate her again fully, and I
don't want to take that risk. I'm planning to move kittens into a
bigger pen next week (if it ever arrives), and that will be in an area
where the other cats will be able to see her and the kits, so they
need to be comfy with each other before that point.

Millie has been a little down today. She's panting on and off as well,
and looking at her tummy, I presume that this is because the kits are
now using their claws a lot more which are well on the way to
hardening. It must hurt her incision no end, but they are still too
small to have their nails clipped.

I think I'm falling in love with bluecream already, and I'm trying so
hard not to. Her determination makes me laugh out loud on a regular
basis. I'm suggesting Babble as an interim name for her, but another
friend likes berry, as in blueberry. He's decided that, in the super
important matter of naming, the cream part can simply be disregarded.
Do any of you have a preference? Apache is starting to take after her
sister and now grizzles if you touch her and she's feeding.

We also have a second kitten who's learned to purr, or partially
anyway. I caught 2 of them doing it together earlier. You'd be
surprised how loud that tiny body can make a purr. It's incredible!

I had a visitor down yesterday who took another photo for me. Not sure
of the quality, but I thought you might like to see anyway. This is
them at 3 days old.
Posted by Carly at 22:53

KC and the Giggleman Kitties said...

What a beeyouteeful fambly Mom Millie hafs. They are adorable. Mine Mom ML won't stop wif tha shrieks.
This is such a fun adventure fur all of us, I's remember when we had two momma cats in wif us and two litters wif 9 kittens! It's so fun to watch them grow. Only problem is, you bond wif them and want to keep all of them. That's how I ended up wif six brofurs and sisfurs!!!!
Love & Purrs,
KC

I told Mom Terri (Truffle and Brulee's breeder) that I didn't see how she could ever let the adorable kittens go after she'd had them 12 weeks. The babies are adorable.

They are cute little things, I am surprised to see how dark one of them is. Looking forward to more photos as they grow up.

Congratulations Millie on your beautiful little family! They really are beautiful, such precious babies. We know you will continue to be an excellent Mum and Carly will help you out when the babies get a bit boisterous.

They are so dang cute! I's love to teleport right over and give them all tiny kisses. Will shoot you an email today so you can capture the addy, and Madi & Mom asked me to tell you they they are unable to leave a comment for some reason, but they have been reading!