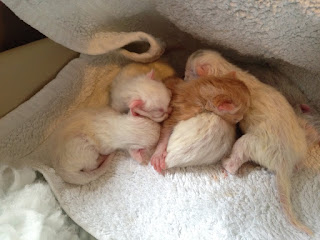 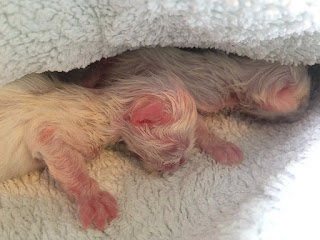 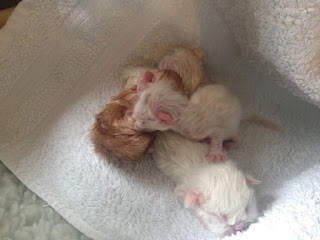 Apologies if this post is a little all over the place, but I'm
exhausted, so don't know how coherant it will be.

Gabby had me up every 2 hours last night with crying, unhappy babies
and an unhappy mum cat. I don't know whether she's feeling under the
weather or whether the food isn't agreeing with her (she's having
stuff she doesn't normally get because her apetite isn't great at the
moment), but she had an upset tummy yesterday and threw up quite a
lot. Thankfully there's been nothing since then, but kitten weight
gains haven't been as good as they were previously, so I'm keeping a
very, very close eye.

So, back to our story. That first night was about as peaceful as a
first night after labour can be. Because I'm a worrier, there was
still frequent checking going on, but to be honest, they hardly needed
me. All babies were feeding well, and when I weighed them the next
morning I was shocked to find that most had gained 10 grams. Newborns
normally lose weight due to the energy requirements of birth, then the
fact that mum's milk is still coming in and is cholostrum rather than
full fat at that point, but not these guys!

And that was how it went for the next few days. There was hardly a
sound from the nest as babies were kept fat and happy with full
tummies. Weight gains were good and steady, with nobody losing weight
at all until yesterday when mum was unwell.

Gabby is, or should I say was, the kind of mum who wanted to be with
her kittens all the time. She came out once a day to use her tray and
then was straight back in there again. Eating was another matter. She
ate all her placentas meaning that in terms of nutrition, she was Ok
for a few days. However, I don't like it when my girls don't eat,
particularly when they're nursing such a large litter. I tried her
with raw which she turned her nose up at. Then pouch food which is
normally a big treat. That one got some interest, but not enough. Then
it was tinned which again got a little interest. The only option left
was dry.

I hate dry food. I won't get into it here as this will then evolve
into a food and nutrition lecture. In brief, dry food has a
generalised dehydrating affect on the cat, not ideal when you have 6
little leeches attached to your tummy sucking the liquid out of you.
But dry was what she wanted, so dry was what she got.

Then she decided that dry was beneath her... And so the saga
continues. Today she's in favour of pouches, but I feel like a buffet
with the amount of tins and packets I have to open before something
meets with madam's approval! Still, she'll get what she wants
regardless, so all I can do is keep trying.

If things don't improve today then I'll obviously have the vet
straight out, but kittens are still gaining, albeit small gains, and
she's now showing more self-awareness and having a good old clean up.
Now it's a waiting game.
Posted by Carly at 12:48

It sounds like Mum and babies are in the best possible hands. I hope they give you a few restful nights now. Thanks for the insight.