Apologies, but update at last! 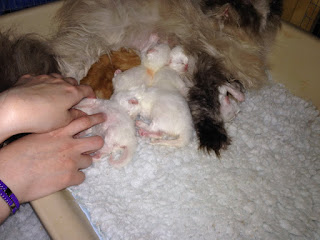 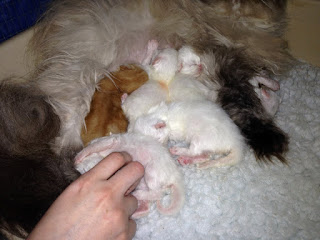 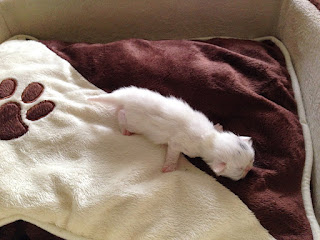 I can only apologise that it's been a while since my last update. On a
personal level, this week hasn't been one of my best ones, and has
been manic in the extreme, so blogging had to take a back seat to the
pulls of real life I'm afraid. Must do better!

But still, I'm back now, and so are the kittens! They're 12 days old
now and living life to the fullest. This is the most advanced litter I
have ever bred, and they're running me ragged! You know that material
bed I told you about? The one with the really high edges? The one that
they couldn't get out of? The one that would keep them all in one
place and easily available for mum? Scuse me while I laugh heartily at
my own stupidity! It lasted until yesterday. Yep, a whole 4 days
before the little sods worked out how to claw their way up the side,
then do a head over heels chuck yourself off the top type maneuver to
get out. Didn't matter how many times I'd put them back in. Out they'd
come again! And who cares that you can't get back into the stupid bed
when you've just had so much fun getting out? It was only 2, but they
were insistent! They clearly wanted a cuddle because if I put my face
down to theirs, they were content to just hang there and get rubbies
and lovins, but stop and off they went again! With a heavy heart, I
decided that all beds must go. Instead, they've been popped onto
bedding which lines the whole floor of their pen. This means the nest
is now a lot bigger, but that means great fun! They've had a whale of
a time charging around from one side to the other, squeaking and
yelling the whole time as they give a running commentary on what
they're doing. "Oh, this is great! Watch me go! Look, I'm up on all
four feet! Hussain Bolt eat your heart out! I'm moving at at least
half a CM an hour! Oh dear, my head's too heavy. Can I run with it
down? Uh oh, it's got stuck. Oops, I fell! Funfunfun!" And on and on
it goes until both me and mum have resounding headaches! They're so
wobbly on their little legs. Think of a baby learning to toddle and
you'll get the picture. Except when you have 4 legs to control instead
of two, and a huuuuuuuge heavy head that you can only just about hold
up, it does get interesting! For the first little while of their
lives, they use swimming motions to get from place to place. They
sometimes forget when they're walking, so half walk, half swim and
fall over when the wind blows the wrong way. Their tails are going
like little windmills the whole time, and the cuteness factor is
through the roof! Wonder if I can get someone to video it for me?

Normally, newborns should eat and sleep, so naturally my worries
massively increased when they started this squalking a few days ago. I
tried turning on the heatpad but then they got too hot. Turn it off
and they just slept in a big kitten pile. I thought they were hungry.
They refused the bottle. I thought they needed toiletting. They
didn't. In the end, I've just accepted that they're a very vocal, very
lively, very, very noisy litter!

They've all more than doubled their birth weight now and are gaining
steadily. There's always 1 who doesn't gain as much as the others, but
as it's always a different one and they all consistently refues the
bottle, I've made the executive decision that I'm not going to worry
about it unless they tail off for more than a day... I figure if I
keep telling myself that, then I might just take my own advice one
day!

3 kittens now have their eyes completely open. Surprisingly, it was
the two smallest whites with black splodges that started first,
unsurprisingly closely followed my Mr naughty red boy who is a drama
queen extraordinaire! The other 3 are a bit slower, but they'll get
there. The tiniest kitten at birth is now the 4th biggest, but
surprisingly she still has part of her chord attached to her tummy.
I'm just waiting for that to fall off. Shouldn't be much longer.

They squabble so much now, sometimes fighting just for the sake of it
even though they all have a nipple already. They seem to take an
unholy pleasure in pulling each other off just to see who can scream
the loudest!

Gabby continues to demand free access to the pen, and point blank
refuses to jump through a top opening. This has meant that we've had
to construct a barrier to stop kittens simply throwing themselves out
of the door, the same way they did with the bed. They're very, very
cross about it, and constantly test their might. So far they're
failing, but something tells me it won't be too long before my bedroom
isn't safe from little fluffs!

They'll move into their much bigger kitten pen and out of the newborn
one probably in about another week. Again this is something I normally
leave until they're about 5 weeks old, but I think these guys are
going to want the space to run and be little hooligans!

Thankfully Gabby has now decided that she quite likes her raw food
again. this has done wonders for milk production, and she's so full
that kittens can have fat little tummies within about 10-15 minutes of
starting to suckle. Again this is new for me as mine in the past have
taken a good half an hour to be full up and sleepy. The only thing I'm
sad about is that she never seems to want to cuddle them. She's happy
to lie near them outside where they can't get to her, but of course,
as soon as she goes back in they think it's food time, so all she ever
knows of them is when they're suckling on her. I just wish she could
get the pleasure of going to sleep with a big purry pile by her tummy,
but she won't let them.

She's still squashing them, although not as much now that the bed has
been removed. I'm hopeful that I can start leaving her alone for short
periods now, although last Sunday was a disaster. She got so upset by
having the cat sitter in that she stopped letting milk down, and all
kittens lost weight. Not really sure how to handle that one. I've
already cancelled a show this weekend which has lost me a lot of money
(not that that's important when it comes to her happiness), so yet
again, one of the unexpected costs of breeding. She'll need to get
comfy soon though as I've got a wedding to go to on the 11th of July
which I simply can't miss! I'm hoping by that point that kittens will
be well on the way to being weaned, so less dependent on her.

As for my sleep, I'm getting no more of it now than I did almost 2
weeks ago. She still wants my help to get everyone arranged to her
satisfaction for feeding. I suppose I've made the rod for my own back
because I'll keep getting up and doing it, but if I don't, I just lie
in bed and imagine poor little hungry mewing, freezing kittens
(ridiculous I know) who feel lost and can't find their mummy as they
wander the barren wastelands of the warm, comfy pen, and so I don't
sleep anyway! Then Mr 2 splodge will come trundling over for a cuddle
when she (really hoping it's a she as I'm a bit in love) sees me come
into the pen. Then a friend will wonder what 2 splodge is up to and
come investigate. Then they'll divide into two groups. then I'll put
them back with mum. Then they'll race each other to see who can get
back first for another tickle. Oh and on and on it goes! My eyes are
hanging out of my head with tiredness as I won't leave until they're
all latched and feeding, and their capacity for cuddles is great, so
it takes a blooming long time for them to give up!

Wow, that was a bit longer than I thought it would be! Anyway, I'll
leave you with some photos taken at 8 days old, and will promise to
try and be better about updating in the next few days.
Posted by Carly at 15:58

The joys and challenges of being a breeder. I remember Truffle and Brulee's breeder sharing all of the daily changes in the kittens.