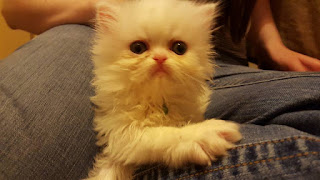 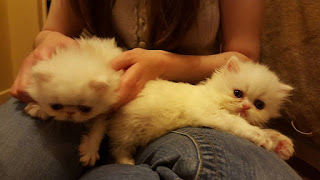 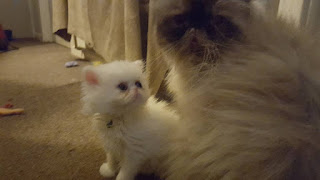 Well, another week has come and gone, and kittens are even bigger and
even badder if such a thing is possible!

They've become so so mobile this last week, and are now able to run
and pounce at top speed without falling on their faces. They've
started the sideways crab walking too when they're out playing which
is incredibly funny to see. all kittens do it. They puff right up to
look their fiercest, then they eye the unfortunate brother or sister
who is the target of their hunt. Then they stop a little and think
things through, because they're clever, you know. The thought process
goes something like this.

If I just walk right up to him, he's gonna see me coming. then he can
run away. Hmmm, maybe if i work it so he doesn't see me, that means he
has no warning so he can't run away so I can bite his ear really,
really hard! After all, it worked with that toy earlier on. It didn't
stand a chance! Hmmmm, now how to do it without being seen. (kitten
then wiggles around a bit and assumes different positions until...)
Eureka! I've got it! If I turn sideways, I can't see him any more! So,
if I can't see him, then that must mean he can't see me! Now if I just
walk sideways at him, and do a little jig every now and again to face
forwards and have a quick peep to make sure I'm still on course, well,
he'll never know what's hit him!

There then follows a session of back arching, tail swishing, crab
walking hunting, which always ends with the stalkee casually walking
off with a look of disgust, and the stalker left completely bemused as
to why the flawless plan appears to have, well, a flaw!

They're out much more now, and tend to only go into the pen when
they're ready for sleep (which is not very often sadly!). They had
their first foray into the living room today, which means that my
house looks like one giant cardboard box! Why? Because I use old boxes
to block off areas that I don't want them getting to. It helps me keep
cables safe too, and although it's not very attractive, it is very
practical! They tried their hardest to scale the barriers, then gave
up and just settled for trashing the accessible parts of the house
instead. They've discovered that human feet are good for biting, and
that if you tug very hard with all your teeth and all your claws, you
might even be able to steal a human sock... And they make wicked toys!

I'm introducing a new concept to them this week... The cuddle
punnishment. There's no point in telling a kitten so young off for
doing something you don't want it to do. It just doesn't work as their
concentration span is so miniscule that they just won't remember 2
minutes later. If you tell them off, all you do is teach them that the
human is scary. Instead, when they do something I don't like, like
attacking my foot, chewing my jeans or trying to shed my leg, I pick
them up and hug them until they give up and lie still. They don't want
the hug but they can't get away either. They also can't help enjoying
it because they're being tickled and kissed. So what you end up with
is frustration to get back to play. you have to be consistent, but do
this every time and soon they don't bother with the undesirable
behaviour unless they actually are tired and do want a cuddle. It's
starting to work with these guys, but they're slow learners. Win win
for me as it means I get to do lots of cuddling! Sadly, bite
inhibition remains more of a concept than a reality, but again that's
not unusual, particular, I've found anyway, with raw fed babies.

A couple of them fell asleep in my lap today, but little left knot
stayed the longest. She appears to seek me out wherever I am and make
herself comfortable, something that's very dangerous as it makes me
want to keep them... And I decided I wasn't this time!

They are now all eating unaided. I've had to split their feed into two
bowls now as they all want to eat at the same time and get very cross
if they can't chow down exactly when they want to! They're now getting
through about a KG of raw a day between them and mum, and obscene
amount of food considering that a fully grown cat should only eat
about 100-120G a day. My other 4 can't even manage half a KG between
them on a good day! They're little pigs! Everyone who sees them
comments on how jolly and roly poly they are, but that's just the way
I like my babies, fat and healthy and happy.

They had another visitor on Friday who took all these photos. They're
a little wary of new people but this is more due to lack of interest
than fear. They're going to have lots more visitors soon as they are
due to start interviewing their potential new homes, the bit that I
find very, very sad. The first of those visitors comes this weekend.

I'll leave you with some more pictures of them taken at just under 6 weeks old.
Posted by Carly at 19:59

I didn't know this site was done by the folks from the Lee County Clowder. How are the kittens doing now?